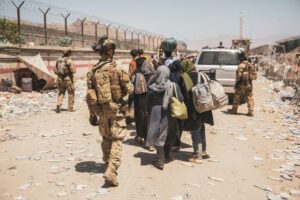 GD – Rome, August 17 21 – There is no doubt that the Taliban’s “military walk” to the cities of Afghanistan and the capital Kabul (the rural areas were already in their hands!) Would not have been possible without the unexpected and sudden collapse of the army and institutions of the former pro-western Afghan republic. We need to focus on this phenomenon to understand what really happened.

When things are done, after twenty years of commitment, hundreds of thousands of victims and billions of dollars thrown to the wind, we cannot take refuge, as the President of the United States Joseph Biden did, in the resigned consideration that the project to “build a nation, a unified and centralized democracy, overturning centuries of history ”was unattainable. On this we could agree with a political scientist or a political philosopher, not with the “de facto” leader of the West.
If even on July 8th Biden assured that there would not be a new Saigon (“You will never see people taken from the embassy roof”), it means that historical errors – the latest attributable to his predecessor Trump: the signature of the ambiguous Doha agreements with precise commitments for the Americans and vague promises by the Taliban) – was joined by the complete failure of intelligence, the total misunderstanding of the real situation on the ground, social and civil even before military.
The rain of money that has fallen on Afghanistan – over 2 trillion dollars allocated only to train and equip the Afghan army which, in reality, has melted – has not reduced the abysmal distance between rich and poor, between the powerful. and weak, between chieftains and followers without hope, nor cemented the trust in the new institutions modeled on the example of the West and always perceived by the population as distant and alien.
The suspicion (to say the least) is that many of those dollars ended up in the pockets of local war lords – such as the one the winning Taliban invaded a few days ago in the parlor, decorated with tacky taste – or voracious and undeserving satraps ( Russian sources report that President Ghani fled to Uzbekistan with four cars loaded with money).
In short, it is likely that the project of “exporting democracy” is in some cases impracticable, in others frankly not even desirable, but trying to export without even knowing and understanding the destination country, on the basis of a somewhat hasty anthropology and a bit imaginary, it means devoting oneself to catastrophe. Which arrived on time: in a week, not in ninety days, as the pessimists predicted.
They thank the Russians and especially the Chinese, who have long established a fruitful dialogue with the Taliban (who have grown up politically in these twenty years) and can now give vent to their legitimate ambitions on this part of the Silk Road.
The European Union has not arrived, as too often happens, although the collapse of Kabul will suffer the most concrete consequences: we will pay with new waves of refugees for the inexistence of a common foreign policy even on the Afghan problem.
Paolo Giordani
president of the International Diplomatic Institute